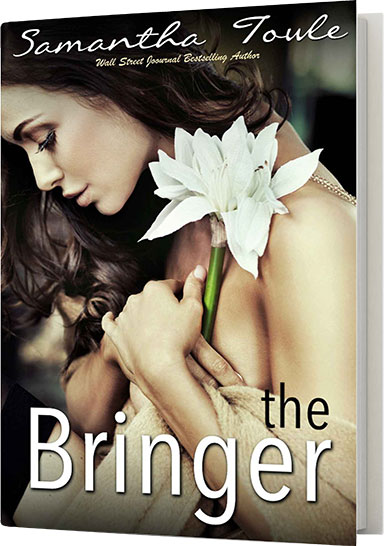 available to buy from...
Kindle EditionUKUSPaperback

Lucyna is a Bringer. An emotionless being, whose role is to guide souls to the gate of Heaven.

Until she meets James.
In that moment, everything she knows changes, when she is struck with the sensation of feelings.
Curious and unable to help herself, Lucyna finds her herself drawn to James, against every instinct she has ever had, against every law of the universe.
Before she knows it, she’s fallen in love.
And for a Bringer, that's a terrifying fall.


Chapter One - The Awakening

I stand by the doorway and wait patiently while she looks at what used to be her body.

Turning slowly, she brings her vivid blue eyes to look up at me. “Are you an angel?” she asks in a timid voice.

If I had a penny for every time I’ve been asked that - well not that pennies are of any use to me, but still.

I gently shake my head. “No. I’m not an angel. But I am the one who’s here to take you to the angels.” I add a friendly smile to make her feel more at ease.

She considers this for a moment, then turns back to look at her grieving parents who sit agonised by her bedside.

“Will I ever see them again?” I can hear the tremor in her tiny voice, sadness I know it to be.

“Yes. I don’t know when, but one day you will see them again.”

This I’m not privileged to have seen with my own eyes, but it is what the Elders tell us to be true.

I deliver humans to the door of Heaven. To their door into Heaven, but don’t truly know what occurs when they pass through. But I do know it to be something wonderful, giving joy and happiness to all who go there.

It’s what I do, and have done since I’ve existed. I’m here to guide, to make humans feel as comfortable as possible through their, mostly unwanted, transition from being alive to just being. Humans struggle to leave behind the ones they love. And for their sake, I have to ensure they don’t try to stay here on earth, trapping themselves for all eternity. Because once they walk away from Heaven, they will never, ever, be able to go there. Once their door closes, it never again opens.

I glance over at her parents. The mother is sobbing, clinging to her daughter’s lifeless hand. The father has silent tears trickling down his cheeks as he desperately tries to comfort the mother. They both appear broken, beyond repair. Humans always take the death of a child the worst. I think I understand why this is.

I have seen what these two people are feeling hundreds, of thousands, of times before. Have been told in vivid description by many humans who I’ve taken to Heaven how it feels, but have never felt it myself.

Not in the physical or emotional sense. I have an awareness of feelings - sorrow, happiness, love, pain, compassion. I also note the sensation of touch. But I don’t actually feel it. I do comprehend the joy and beauty in things, such as the sun rising in the bright blue sky, or the sound of a songbird singing gaily in the morning. Just not in the same way as a human does. I know of all the feelings that surround me every day, but they just don’t attach themselves to me.

That’s just how it is – Bringers don’t feel.

I believe we were conceived like this, so we don’t attach ourselves to humans in any way. Often, though, I do wonder how it would be to feel.

With what I see in every single moment of my existence it obviously presses me to peruse the question which is worse - to feel the agonising pain of loss, or to have never felt it at all?

I have no concept of what it is like to love someone with such ferocity that it rips you to your very core to lose them. My imagination limits my understanding.

The child I’m here to take to Heaven – Amy Jones, as I know her to be called - takes one last look at her parents, at her body, then turns and tentatively walks toward me. Her movement slow, reluctant.

It’s strange that humans have two names. Sometimes they have three, four, sometimes more. I have only one. When Amy Jones reaches me, she slips her tiny hand into mine and looks up at me.

“You look like my mamma,” Amy Jones says, inclining her head toward her mother.

I ponder that for a moment.

It intrigues me how I look to each human. They see me as whichever female human form makes them feel most comfortable. Like now, with Amy Jones, she chooses to see me akin to her mother, thus making her feel safer. They do this unknowingly.

I have never seen myself. I have no reflection upon which to do so. When I look down all I see is a solid mass of light, alike to the shape of a human body, which glistens and sparkles, just as the snow does when the sun is gently dancing off it.

Often I have wondered what my true appearance is, or if I at all have one.

Is this exactly as I look now?

I glance down at Amy Jones about to ask this very question, when I see a faraway look in her eyes, sadness covering her face. And very quickly, my question becomes incredibly futile.

“Are you ready to go?” I ask instead.

Her eyes glitter up at me. “What’s your name angel?”

I smile to myself. Children never believe I’m not an angel. I think it somehow comforts them to think I am.

“Lucyna,” she hums my name over her plump lips. “That’s a pretty name. Am I going to Heaven, Lucyna?”

“Will you be staying with me in Heaven?”

“No. I can only remain with you until we reach Heaven’s door.”

Her face saddens. “Then will I be alone?” The fear is so apparent in her voice, it practically tremors across the room.

“No, you will be with others. Many others just like you. You’ll never be alone.”

She mulls over my words for a moment. Her tiny lips trembling ever so slightly. She bites down on her lower lip.

“Okay, Lucyna. I think I’m ready to go to Heaven now.” I sense her hand tightening around mine.

Her heavily lashed lids close slowly. I can sense her fear. Her apprehension of stepping into the unknown.

“You’ve nothing to fear Amy Jones, you’re safe,” I whisper.

I close my eyes and we’re gone.